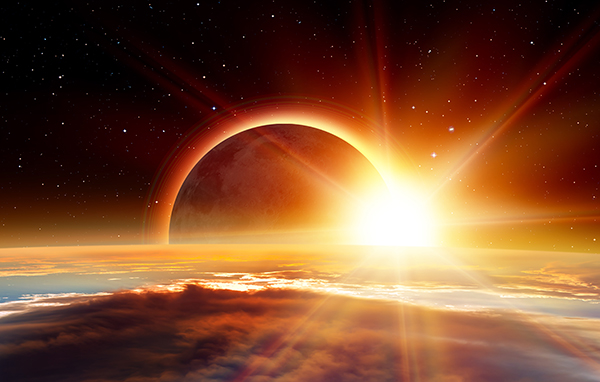 So, typically, I would start this type of content with an examination of the eclipse season and how the eclipse(s) influences are going to affect us in our personal lives.

I mean that’s what everyone wants to know, right?  How is this going to ‘affect’ me?

Well, I’ll get to that!  But let’s begin with what is happening in the sky because eclipses often act as triggers for existing planetary configurations and this eclipse season is no exception.  I am not going to go over technical stuff on the lunar phases because I did that in my lunar phases portion of this web series, and you can read that at your leisure.  It does give a backdrop to the information that I am covering here.

The first thing that I think everyone will notice is that through most of eclipse season, Mercury will be retrograde.  On July 7th, 2019, Mercury reverses course in fiery Leo and travels back to 24 degrees of Cancer, which is the same degree as the lunar eclipse that occurs on July 16th.  Mercury turns direct on July 31st and retriggers the eclipse.

Mercury goes retrograde three to four times a year, and since the explosion of social media, the trickster planet has made its way into pop-culture.  Almost everyone knows about Mercury retrograde, and they groan when they hear the cycle is coming.  However, because of the focus on mishaps, miscommunication, and general trickery, the practical side of the retrograde often gets lost.

In July, Mercury will retrograde in Leo.  Mercury is how we understand life, and in fiery Leo, we understand life through the imaginal realm that we experience the most in childhood.  Have you ever seen a child fascinated by the mythic world of unicorns, fairy princesses, handsome princess, magical kingdoms, and even the monsters that ultimately must be dealt with to save the kingdom?  This mythic reality is alive and well for Mercury in Leo, and on the inner level it’s not the imaginal world that’s important, it’s the creative function that develops and the individuality that forms.  Mercury in Leo gets to create its own world, cast its own actors, and write its own endings.

When Mercury goes retrograde, Mercury works on the inner level.  A keyword I associate with Mercury retrograde is ‘reflection,’ and I feel this is the easiest way to work with it.  So, instead of just projecting Mercury onto mishaps and communication problems, it’s more productive to look within.  In Leo, the creative world and fertile imagination turn inward, and it’s about creating oneself and defining one’s individuality and values.   During eclipse season, it may be helpful to focus on how you are writing your own script and how you are ultimately in control of your own destiny.

There are a couple of aspects that are also active in the heavens – Jupiter in Sagittarius square Neptune in Pisces and Saturn conjunct Pluto in Capricorn.

Let’s start with Jupiter square Neptune.  Jupiter is currently moving through its own sign of Sagittarius and Neptune is moving through Jupiter ruled Pisces, a sign that has a strong affinity with Neptune.  Jupiter is the planet of expansion and tends to expand any planet he aspects.  Neptune is a planet that reflects the collective dreams and visions in search of redemption and has a particular idealization of life colored by his sign in the zodiac. In Pisces, Neptune idealizes unity, equality, and being part of a broader community.  You can easily see Neptune alive, and well in politics, ideas and individual values seem to be less important than being part of something with other people whose life experiences may be similar to your own, and this is happening on both the left and the right.

Jupiter in philosophical Sagittarius strives to have an understanding of life, and in aspect to Neptune, Jupiter expands Neptunian idealisms, yearnings, and dreams. On the positive side, Jupiter-Neptune aspects are great for creative work and spiritual purposes.  While this aspect is active (until November 2019), you will feel more charitable, empathetic, and compassionate.  In its more challenging mode, Jupiter-Neptune can be unrealistic, easily swept away by movements and trends, and has an intense need to be part of the collective group regardless of the potential cost.  There is a tendency to ignore the obvious and logical for the redemptive vision.

I didn’t want to slide into politics, but it’s the easiest way to see this aspect at work.  There has always been a divide between idealisms and since the 1970s political discourse has increased into a blood sport. The social and outer planets seem to color Neptune’s quest for redemption, and the tone slowly distills through the collective.

The current political vision is group-oriented and individual desires, and agendas are sacrificed for the greater good of the collective – and this is on both sides of the political spectrum. The current collective quest for redemption is not concerned with the personal quirks and dishonest behaviors of its leaders, it is concerned with leveling the playing field regardless of how difficult that may be to maintain, and despite the current political actors on the world stage, many of whose motives are questionable. The pursuit of the redemptive vision is all that matters.

It is tough to provide an antidote for a collective vision.  On one level or another, we tend to get caught up in the movement.  After all, we all participate because we are all part of the collective.  The only thing we can do is ask questions, do research, and stay true to our values. 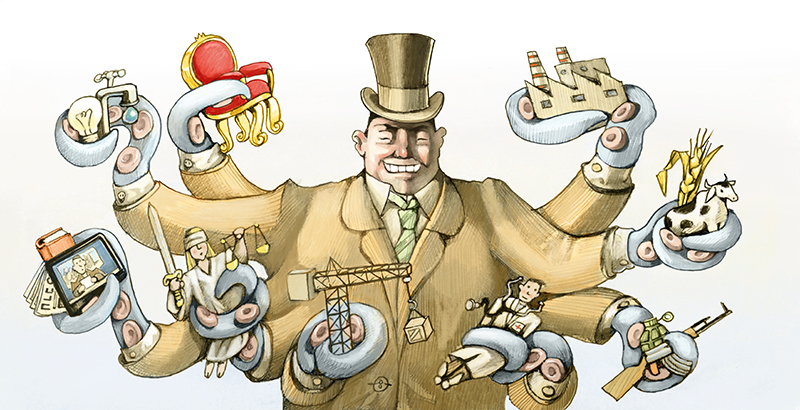 Next up is Saturn conjunct Pluto in Capricorn, which will be active through early 2021.  There has been plenty of content written on Saturn conjunct Pluto, and I will be releasing my take later this summer, but it is so significant to this eclipse cycle that I’ve decided to discuss it briefly here.

Saturn and Pluto conjoin roughly every 35-40 years depending on where Pluto is in the zodiac.  The last conjunction occurred in Libra during the early 1980s and it led to a geopolitical realignment.  Relationships between countries radically changed and worldly opponents became viewed as ‘evil’ or ‘diabolical.’  Remember, the Soviet Union was once known as the ‘evil empire.’

The dynamics of relationships also changed.  As women entered the workforce in increasing numbers, their financial needs were no longer male-dependent.  Although women were grossly underpaid (an issue we still deal with), they had their own money and capacity to make more.  Not surprisingly, the divorce rate increased dramatically, and financial security and survival were no longer the primary reasons two people got married.

Saturn has been moving through Capricorn, his sign, for about 1 ½ years.  Capricorn is an extremely conservative position for the ringed planet, and he tends to want to preserve the status quo, the traditional order, and making sure everyone stays in their lane.  He is authoritarian, likes to control, and can be repressive towards anything that may shake sturdy foundations. Pluto also likes power, but he gains it by uprooting and bringing to the surface anything that is spoiled and past its shelf life, by amputating it to survive.  In Capricorn, Pluto uproots governmental corruption, cooperate malfeasance, and religious authorities and exposes them in the light of day, which you can see daily in your news feed.  While this aspect is active, you may feel powerless, at the will of a governmental or worldly structure that cares little about your plight, and at the mercy of corporations that take advantage of you with little recourse.  However, Saturn-Pluto can help remove structures from our personal lives that may be corrupt or no longer working and rebirthing ourselves through more practical life management.

Now these are severe issues, and it’s often difficult to face the ways we have contributed to our participation in life’s difficulties, but it is essential if you want to make the most of this aspect.  I have long believed that Pluto in transit likes to enter through the other planet’s weaknesses.  In the case of Saturn, he tends to work through our fears.  The things we hold onto in life, whether that be a low paying job, complicated relationships, or even self-defeating behaviors, we cling to because of fear.  Saturn-Pluto asks us to challenge these fears to create a more meaningful life and gives us the ability to build more solid structures.

I am now going to move to the first eclipse that occurs on July 2, 2019, at 11 degrees of Cancer.  Now, if you have planets or angles between 6 degrees and 16 degrees of the cardinal signs (Aries, Cancer, Libra, and Capricorn), then your chart will experience the eclipse stronger than other people.  Additionally, you will need to note the house the eclipse lands in because the sphere of life the house represents will often be the stage the eclipse walks out on.

There is good news about this eclipse.  The eclipse is a North Node eclipse, which reflects new energies coming in, meaning that this new moon is excellent for intention and magical work to bring in new opportunities and start new ventures in your life.  So, get those candles and vision boards ready to go!

The solar eclipse occurs in watery Cancer.  You may notice an emotional sensitivity to the environment, and family concerns may crop out of the blue.  Cancer rules the home, domesticities, countries, and one’s heritage.  This energy is an auspicious time to consider home repairs, redecorating, discovering your familial roots, and even repairing damaged familial relationships.

The eclipse does form an opposition to limiting Saturn in Capricorn, which could limit or slow down the promise of the eclipse.  There may be unexpected obstacles and concerns, but it doesn’t mean you can’t proceed forward, it just means that you should be cautious (especially with Mercury going retrograde later in the week).  Remember, sometimes slow and steady wins the race.

The next eclipse happens on July 16, 2019, and is a little more troublesome.  It’s a lunar eclipse that occurs at 25 degrees of Capricorn.  If you have planets or angles between 20 degrees and 29 degrees of cardinal signs (Aries, Cancer, Libra, or Capricorn), then your chart will be sensitive to this eclipse, and like the solar eclipse, take note of the house the eclipse falls in.

There is not a lot of good to say about this lunar eclipse; it is incredibly challenging and is a South Node eclipse.  The South Node has a rather nasty reputation in astrology and points towards being forced to let things go, and resisting the energy usually makes matters worse.  So, this eclipse is easier to manage if you are willing to take an in-depth look at your life and let go of things that no longer serve you.

Capricorn is an earth sign, and it is concerned with practical matters such as money, career, social standing, and reputation, and these themes could quickly surface over the next six months.  The eclipse is conjunct Pluto, which can bring intense emotions to the surface, and often before we are willing to make the changes necessary, we need to learn to stand in our power and take the reins. Usually, with this eclipse, we are required to slowly climb up the mountain, facing the obstacles that stand in our way head on, and eventually getting to the top.  For some, it might even require finding a new mountain to climb that is more aligned with your purpose and ultimate destiny.

That’s it for this blog post; there are two more in the series that dig deep into the personal chart and how eclipses affect the planets and houses.