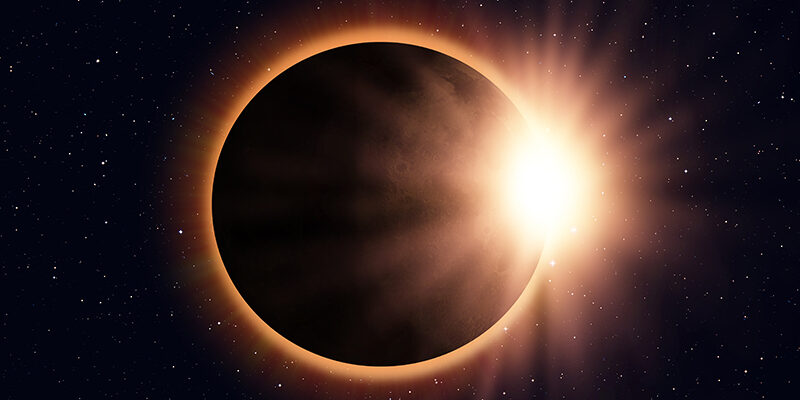 After a week of a cosmic slowdown, the heavenly machine churns up again.  This week have four major aspects (Mars trine Neptune, Mercury sextile Saturn, Venus sextile Neptune, and Sun sextile Saturn), and a solar eclipse in Sagittarius.

First, all the major aspects this week are relatively light. The only thing that is peculiar is that they involve two planets that really don’t like each other – Saturn and Neptune.  Saturn is interested in the physical world, which is what you can observe, do, and accomplish. He requires effort and determination.  Neptune is interested in the ‘other world’, meaning everything beyond the physical. In Neptune’s world, there is no concept of time, reality, or rules; everything is fluid.  So, there will be a tug of war between the need to take care of duties and responsibilities, and the need to escape worldly burdens. It’s going to be necessary to navigate both worlds. My suggestion is to take care of what has to be done and spend plenty of time engaging in activities that feed your soul.

Secondly, we have a solar eclipse in Sagittarius early Saturday morning.  This eclipse is the conclusion of the eclipse series that began in 2020. Sagittarius is the sign that represents big picture perspectives, philosophy, and beliefs.  However, we have a curious happening in the cosmos, because the eclipse is square the centaur Nessus.

In mythology, Nessus is a member of the rowdy Centaur clan.  He was the ferryman at the Euenos river. Hercules arrives at the river and pays for his wife Deinara to ride to the other side. Upon reaching her destination, Nessus attempts to rape Deinara, and Hercules shoots him with an arrow tainted by the deadly Hydra’s poisonous blood.  As he is dying, Nessus gives a vial of his blood to Deinara and tells her that it will keep Hercules faithful.

Of course, since this is a myth, you know what will happen. After a while, Deinara fears Hercules is being unfaithful, so she pours Nessus’ poisoned blood on her husband’s tunic. Hercules wears the tunic and dies. After his death, Zeus brings Hercules to Mount Olympus where he is honored for his heroic activities.

Since Sagittarius is about higher learning, knowledge, and philosophy (not to mention its image of the Centaur), I felt that including Nessus was necessary. In the horoscope, Nessus reflects poisoning, and since he is currently moving through Pisces, it’s collective poisoning that we are concerned with. Over the last few years, we have noticed how dangerous misinformation is and what it can do to the global community. If you are on a social media platform or visit news sites, you are exposed to it on the daily. In many ways, we are ‘poisoned’ by collective movements, many of people involved are true believers in what they are posting, but propaganda can be deadly and can poison ordinary (and even some unordinary) people and their outlook on life.  I am hopeful that with this aspect being a separating square, much of this will begin to fade away, because we are encouraged to leave ‘group think’ (which can be equally poisonous) behind and focus on our big picture objectives. We need to take our ‘personal beliefs’ and take charge of our ‘personal worlds’, and start living our best lives, and leave the noise to others who wish to participate. Instead of being poisoned by the beliefs or statements of others, we need to be the cure.