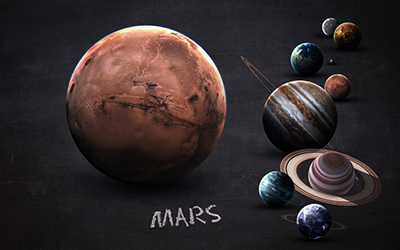 It’s time for a planet to go retrograde.

So, batten down the hatches and secure the battlefield – it’s about to get real!

Oh and it’s not Mercury that’s our planetary villain (although he does go retrograde later this month).  Instead, the planet that is up to bat is Mars, the planet of war and aggression.

Over the next few days you are going to see tons of information about Mars retrograde across social media and the blogosphere.

Here is what you are going to see:

Now that is some list!  On the practical level, these tips are valid and they do need to be taken into consideration, but what does this really mean on the inner level and more importantly how do we use Mars retrograde effectively.

The world of literature is filled with gods, literary figures, kings, and creatures that embody the expression of the planet, yet I think the figure of Ares (God of War) from ancient Greek mythology stands out the most.   In Homers ‘The Iliad,’ Ares is described as a 300 foot hairy, sweaty being that frequently goes berserk, lusts after everything he sees, and on the battlefield likes to destroy and devour human flesh.  This is clearly not someone you want to take to a social event, yet despite Ares vulgar and crude imagery, he was honored and held a prominent place in both Greek and Roman culture.  In fact, all the war gods of myth are often revered and dignified.

In ancient culture, war was personified as the glorious expression of the human spirit.  Ares was revered because he stood for not only our struggle for survival and as the champion of the weak and less fortunate, but as an archetypal image willing to fight for our integrity and our will to survive in a world that is often against us.  Without him (and without a Mars) we would have nothing to fight to make each of us special, vibrant, or unique individuals.

On the planetary level, Mars is the desire principle.  His only function is to go out into the world and get what we want in order for us to feel fulfilled and he is always in service to the Sun (our individuality and what makes us feel special).  Mars needs victories and he does this by meeting not only our desires, goals, and ambitions, but by helping us defend ourselves from an often hostile world, which is not only competitive, but is fundamentally opposed to individual expression.  Our need to fight comes packages in many ways, such as fighting for our families, country, religious principles and even occurs in our relationships and the work place.   In essence, Mars is the fighting principle in order for us to achieve self-definition, individuality, survival, and on one level or another our Mars is always at war with something each and every day.

When Mars is retrograde it brings to the surface those issues where we are blocked from getting what we want.  This can come in a variety of shapes and sizes, such as career dissatisfaction, relationship disappointment, financial woes, or even personal dissatisfaction.    However, despite the frustrations, it is also a time where we are forced to re-analyze what it is that we truly want out of life.   As was stated earlier, the outer-world (meaning everything outside of yourself) is not really concerned about the individual, yet about patterns that affect larger fabric of life in general; therefore, it provides us with tools that if we can face what they require gives us an enormous breakthrough in our future. Mars retrograde is one of those tools as frustrating as it can be.   If we can face our struggles, Mars gives us the ability to change our lives.  As Mars promises whatever we desire from life we have some chance of getting it.

Isn’t it time you get yours?