I am going to be using horary astrology to answer the question.  Now, there are some controversies over whether someone should use the first house or the seventh house when asking these types of questions.  In my horary practice, I have come to find that if I actively know the person I am asking a question about, and the question does not directly involve me, then I am acting as their agent and they become the first house. If I do not know the person, then the seventh house is used. 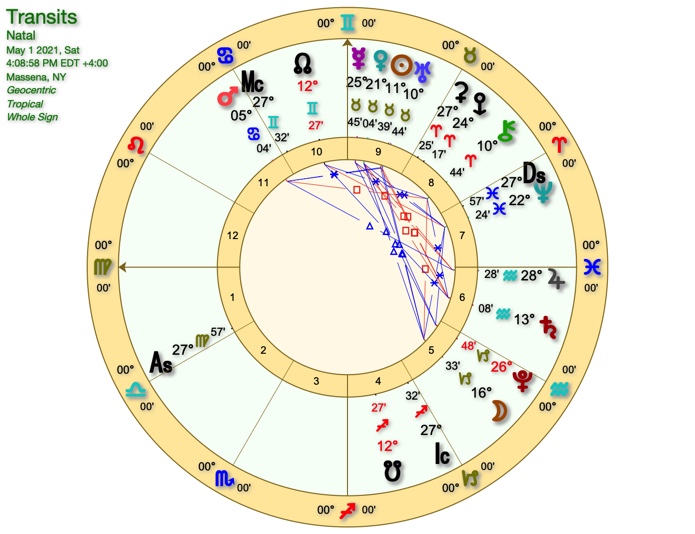 In this case, I do not know Caitlyn Jenner, so I will be using the seventh house and making that the Ascendant of the chart (known in astrological language as turning the chart).

Late degrees of Pisces is rising in the chart, which I found curious considering that Jenner has just announced that she will run.  The ruler of Pisces is placed in the twelfth house of the chart and the Moon (which co-rules the entire chart) is placed in the eleventh. Additionally, we have Neptune in the first house conjoined to turned Ascendant.

The Moon is in the eleventh house of the chart, which in psychological astrology is the house of group consciousness.  The Moon is besieged, and she is in her detriment.  This means that this Moon is not really in a good position and that she needs an enormous amount of help.  Now, for Caitlyn, the good news is that the ruler of the Moon, which in this case is Saturn, is in its own sign.  I would interpret this to mean that since Caitlyn is new to politics, that she will have the help and support from people behind the scenes (twelfth house) to help her achieve her goals.  It has been stated that there are several people from Trump’s election campaign that have signed on to work with Caitlyn. The Moon is in trine to Venus (ruler of the eighth) and trine to the Mercury (ruler of the 7th) showing that she will not only have plenty of allies in the pursuit of her goal but also will be funded not only through her own vast wealth but from the money of others (eighth house).

We also need to consider Neptune in the first house. Frankly, this concerns me. Neptune is the planet of deception and when he is placed in an angular house, it can often mean that something is missing, or something is not being seen.  Could Caitlyn’s running for office be more about staying in the spotlight and keeping the money train going for her family, since we know that this will be covered day and night on talk television and keeping her family in the limelight, or does she legitimately want to govern?  Of course, we will never truly know (after all it is Neptune) since the Kardashian/Jenner clan have allegedly a shady practice of being less than forthright about their agendas.

Caitlyn’s career is ruled by Jupiter.  Jupiter is considered peregrine in Aquarius and is co-present with Saturn. Again, since Saturn does rule Jupiter there can be behind-the-scenes forces (the twelfth) that could assist Caitlyn.  Otherwise, Jupiter has little strength in the chart and little ability to act on its own behalf.  Peregrine planets are considered to be wandering around aimlessly. So, all the shenanigans of the Kardashian/Jenner clan could come back to ultimately haunt her throughout her pursuit of the governorship.  Remember, Kanye West, another member of the family (although Kim Kardashian is currently divorcing him), recently ran for President of the United States, which many people viewed as merely a publicity stunt.  Could Caitlyn have a similar problem with people taking her seriously?

In horary, for something to happen the querent and what they are inquiring about needs to perfect (in some way come together).  In this case, the Moon (Caitlyn’s ruler) and Jupiter (her career) do not form an aspect.  Further, the end of the matter is represented by the fourth house of the chart.  The fourth house is ruled by Mercury at 26 degrees of Taurus conjoined to the fixed star Caput Algol.  Caput Algol is associated with Medusa from Greek Mythology and is interpreted as ‘off with their head’.   These indications are not favorable.

Finally, we look to the Moon because she rules the action that takes place in the chart. The last aspect she makes is to Pluto, which has a long association in modern astrology with death.  In this case, death of her career goals.

So, based on this chart and to keep the analysis as simple as possible, I believe that Caitlyn will NOT become the Governor of California.